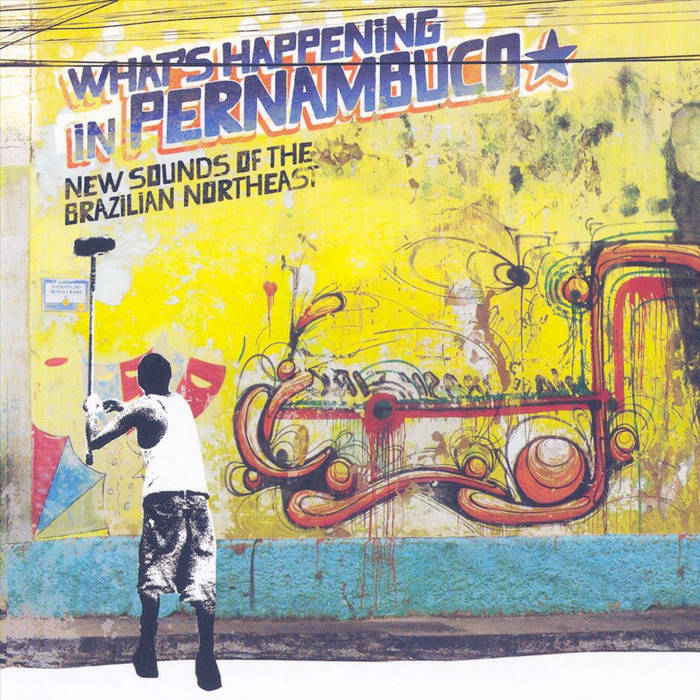 For anyone familiar with Brazilian music, ‘hybrid’ is as crucial an adjective as ‘infectious.’ After all, Brazilians have been the quintessential postmodern musicians unearthing, exploring (even eating!) eccentric sounds both localand global. The tracks on this album are cosmopolitan and cutting edge, and along with their electronic sophistication, they also hint at some primordial flare, a pumping vein straight out of the Brazilian northeast city of Recife inthe Northeast state of Pernambuco.
Still called the Brazilian Venice, Recife – the capital of Pernambuco – was a Dutch stronghold along the Northeastern coast of Brazil, built up in the sixteenth century on layers of ecological and political contradictions. At the confluence of six rivers and the sea, the region’s capitol became a trading center, building up and over the rich delta mangroves. Over the centuries, it was steeped in a diverse history of social, racial, and rhythmic traditions. The music you’re listening to was spawned and nourished in the thick muck of the mangue swamp. As the metaphorical epicenter of a colossal cultural movement, just over a decade old, it has changed the musical landscape of Brazil forever.
In the 1980s, while urban centers of the south like Sao Paulo, Brasília and Rio were inundated with Brazil’s homegrown rock movement, Recife didn’t have much of a music scene at all. It was a colonial relic plagued with inequality and poverty, with the infamous distinction of being named ‘fourth worst city in the world to live in’ by a population studies institute in Washington, D.C. Its economy resembled the brackish, stagnant water all around it that was slowly being converted to dumping grounds and stilted shantytowns. The response to this ecological, cultural and industrial degradation? The MANGUE MANIFESTO, aka, Crabs with Brains, written by Recife journalist and musician Fred Zero-Four:
Emergency! A rapid shock or Recife dies of heart attack! It is not necessary to be a doctor to know that the simplest way to stop a heart is to obstruct its veins. The quickest way to kill and empty the soul of a city is to kill its rivers and fill its estuaries. How to avoid drowning in the chronic depression that paralyzes the citizens? How to return some courage and recharge the batteries of the city? It’s simple! It’s just to inject some energy in the mud and stimulate what’s left of fertility in the veins of Recife.
Fred Zero-Four had gotten together with his colleague Chico Science, another Recife musician interested in jump-starting the local ‘scene.’ Their philosophy? To tap into the extreme diversity spawned along the coastal swamp. To appropriate the biological process of organic exchange into the cultural realm. To use the mangue swamp as a space for excavating traditional sounds and for receiving satellite transmissions from across the world… to celebrate hybridity. Their music? An explosion of punk-rock-funk-rapelectronic sound, infused with the maracatu, coco, ciranda and embolada rhythmic traditions of the rural northeast. The marketing? Revolutionary.
One of the things that set this music scene apart from the rest from the very beginning has been its vibrant ‘live’ aspect. Starting with AbrilProRock in 1993, concert organizers like Paulo André have truly taken advantage of the*satellite* icon of the mangue movement and have brought Recife’s sound into venues all over the world.
Just over a decade later, the mangue scene has seen a lot of talent and a lot of change. After an extraordinary ramp-up at shows like AbrilProRock, RecBeat, Central Park’s SummerStage and festivals all over the world, Chico Science became the world’s mangueboy, only to die in a tragic car crash at the height of his career. His band Nação Zumbi continues to perpetuate his memory and his ‘alchemy of sounds.’
Over time, the Pernambuco scene has prospered and grown even more, with many more mangueboys and manguegirls emerging from the state’s rural and coastal towns, mixing new and old flavors into that thick mangue stew of sound. Whereas Chico Science emphasized the combination of local rhythms with global sounds of punk and hip-hop, Fred Zero-Four preferred a punk blend. Now, contemporary bands are experimenting with even more diverse genres of music like electronica, techno, and sampling other Northeastern traditions like embolada and rhythmic poetry jams.
Above all, it’s important to recognize the social element of this music. Not only did the mangue manifesto start a new era of social activism in local culture, the Pernambuco scene is still one driven by lively stage performances and personal flair (not necessarily by cd sales). You’d be hard pressed to find all of the original cd’s from this compilation, – even in downtown Recife Â– but spend a few weeks taking in Recife Antigo ( Old Recife ) nightlife and you’re likely to hear every band on this compilation headlining one event or another. Their fans understand that music is a way of relating to one another and is best served to large, loud audiences. More so than any other city in the Brazilian Northeast, Recife is firmly planted in tradition and modernity, a true global metropolis. Stroll downtown on a Tuesday evening and you’ll literally have to squeeze between hundreds and thousands of youth dressed in their interpretation of urban panache (from chained leather belts to pink daisies, from neck piercings to jungle face paint, from polyester to flannel) and out celebrating. Take your pick from over ten genres of hybrid music. There is no dresscode. Feel free to partake in any and all shows, no matter what your exterior symbolism seems to say. ItÂ’s a true free-for-all! What’s Happening in Pernambuco ought to be happening everywhere.